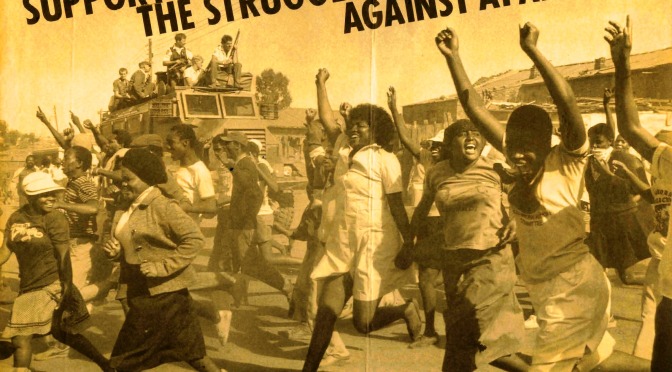 Who said all is lost, I come to offer my heart –Fito Páez

“War of Two Worlds” is about similarity between indigenous struggles in Chile, West Papua and Australia. This Paradigm Shift was about colonized people (mainly Mapuche & West Papuan) and their resistance, at least that is my aim. I mention in my introduction that I prepared the show because of recent (and ongoing) extra-judicial killings of Mapuche activists in the South of Chile. I make no mention of Palestine but Sam Watson did mention it at the rally for the Mapuche on 1 Dec 2018. Of course where do we begin in a topic as big as colonisation? Vietnam? Algeria? The Great Plains of North America? The list is very long.

Whether my coverage of the response to the killings in Chile & West Papua is adequate, others can judge. We live in this time and this place, with all our limitations.

I include a tribute to an aboriginal brother, Robert Wharton, who died prematurely at the age of 39.

The show includes an interview by Andy with Danny (from West Papua) who tells of his amazing escape from death at the hands of the Indonesian military. Danny was an eyewitness of the Biak massacre in 1998 and one of 43 West Papuan asylum seekers, gives his account of a dramatic canoe journey to seek asylum in Australia in 2006

The show has many other voices as well: Marcella (Chile Solidarity), Lili (chaired rally in solidarity with Mapuche people of Chile in Brisbane on 1 Dec 2018) , Pablo on horn (Mapuche), Kristy-Lee (Warriors of Aboriginal Resistance, Brisbane Aboriginal Sovereign Embassy & founder of ‘Voices of the 3%’ ) Sam Watson (Socialist Alternative) and Robert Wharton an aboriginal artist who died just a few weeks ago.

On 1 December 2018 in Brisbane activists, musicians and supporters conducted a solidarity action for first nations people of Chile, West Papua and Australia, protesting the assassination of Camilo Catrillanca by Chilean Jungle Commandoes on 14 November 2018.

War between two different world views
Lilli gave a brief history of the Mapuche 500 year resistance struggle. Mapuche are indigenous people from Chile on both sides of the Andes. In the 1970s the progressive Allende government set aside land for the Mapuche. The Pinochet dictatorship gave the land to wealthy landholders

I’m here to offer my heart
Lilli introduces Jumping Fences and Sue Monk describes how important music is in this and other struggles.

Unconquered Mapuche – visit to Mapuche country
Gamillaray woman, Kristy Lee, describes her visit to Mapuche land and the repression of the state that she visited first hand.  Very difficult for Mapuche to sell what they grow. Assassinations in Mapuche autonomous territory are being carried out by the Jungle squad. Mapuche remain unconquered and Kristy Lee proud to stand alongside another first nations people. Kristy-Lee attended many Mapuche ceremonies preserving their culture.

Mapuche sell their agriculture in a large city in the south but have to pay higher tax in the market.

Touch One, Touch All
At the rally Sam Watson Jnr said that the struggles of the Mauche, West Papuan, and Aboriginal and those of the Palestinians – wherever there has been colonialism – the struggle is the same. As a socialist he said we must resist (Touch one, Touch all). Symbolically Sam Watson Jr and comrades from each struggle combined all the flags (pictured).


People from each struggle agreed to come together and co-operate like this in the future. This event may herald a new era of Latin American and first nations activists in Brisbane. I certainly hope so.

One thought on “War of two Worlds”