Frontier wars – ‘whispering in our hearts’

This week we discuss the Frontier Wars which persisted in colonial Australia right up to Federation in 1901 and beyond. Andy interviews historians Henry Reynolds and Lyndall Ryan. You can listen to the podcast

Henry Reynolds talks about the whispering in our hearts and about the injustice of settlers stealing aboriginal land.
Lyndall Ryan and her team have constructed an interactive indigenous massacre map. Lyndall Ryan

is a professor at Newcastle University. She has spent the last four years drawing up a digital map of massacres of first nations people in Australia. There are 250 massacre sites on the map so far.

The results are pretty grizzly for example:

“Richard Frederick, master of the VDL Co sloop, Fanny, told Mrs Hare, wife of the captain of the Caroline, that he and four shepherds had surprised a party of Aborigines at Cape Grim, killing 12 before retreating to their ship. Mrs Hare recorded the incident in her diary on January 19. The manager of the Company in a report to his superiors in London on January 14 acknowledged the attack but claimed there were no casualties because the guns mis-fired.”

Massacres like this were much more common than the professor thought.  Perhaps   because they were often covered up. On another occasion in the same district Edward Curr (my great, great,great,great grandfather) the local magistrate and manager of the Van Diemen’s Land (VDL) company assisted in another cover-up claiming that a war would break out if he took action against the culprits.

Four shepherds employed by the VDL Co, Charles Chamberlain, John Weavis, William Gunshannon and Richard Nicholson, crept up on a group of Aborigines hunting and shot 30 dead and then threw their bodies to the rocks below. The incident was reported by a VDL Company officer, Alexander Goldie to Lieutenant-governor Arthur in Hobart in November 1829. Arthur then ordered his agent, G.A. Robinson to investigate the incident during his visit to the area between June and September 1830. Robinson interviewed two of the four perpetrators who confirmed the number killed and the location of the incident but said that only one woman had been shot. He then interviewed an Aboriginal woman witness, who confirmed the number killed but insisted that many of the victims were women. However, Edward Curr, the superintendent of the VDL Company, in a despatch to his superiors in London on October 7 1830, reported that only six Aborigines were killed and several wounded and then revised down the number killed to three.

In 2014, Lyndall Ryan from Newcastle Uni applied for a grant to the Australian literature council.  One of the first problems she faced was what define a massacre.  Prof Ryan resolved that a massacre ‘was the killing of six undefended people in one operation’.

Massacre impacts on a whole community. Take 20 people living together on a riverbank. If six people are killed, it makes it very difficult for them to continue and survive – to hunt for food to reproduce and it makes them vulnerable to disease.

If there are a lot of massacres, that takes it into the realm of genocide. The professor said her findings were hard to come to grips with. There are 250 sites on the map so far (make a selection and click inside them and go in to see where the massacres occurred and what happened. They were everywhere. They show what a lying bastard John Howard and his cohort were. Keith Windshuttle woud have to take some responsibility also by applying legal sophistry. Windshuttle uses the false notion that an accused who is found by ‘not guilty’ where the test is ‘beyond reasonable doubt’ means that he did not commit the offence. Windshuttle spends his time casting doubt on well documented history of the massacres where ‘on the balance of probability’ they did occur.

Lyndall Ryan’s work was largely collating information that was already there. There were incidents as recent as the 1940s, or even the 1960s. Aboriginal people have always known this; they know that the past is a story of violence visited upon them, and it is a wake-up call for the settlers. For settlers to come to terms with our violent past. The professor said that on some days she just could not work on the project, it was too much, too sad.

The history wars of 15 years ago were an attempt to suppress the past. John Howard talking on the ABC’s Radio National is still trying to suppress our past (I think Howard should be banned from the ABC, he is a liar and a war monger [Iraq] but a cautious one).  But the digital map is visible proof to everybody. Professor Ryan thinks that there must be some attempt to memorialise what has happened. To acknowledge our pass in some way.

Henry Reynolds – ‘whispering in our hearts‘. 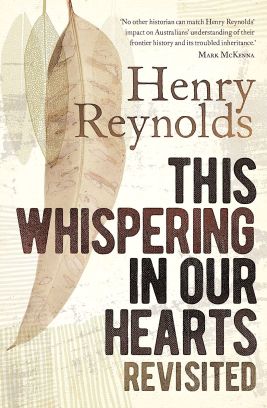 Discusses a book by the same name that Henry wrote 20 years ago and has just released as a second edition with two added chapters to bring it up-to-date.

The book is about the people who from the earliest days took political action to prevent the theft of aboriginal land, the massacres and genocide that occurred.

According to Henry Reynolds this is not a ‘white saviour narrative’. In 1967 there was a referendum about recognition of aboriginal people and this was a modern example of do-gooders trying to make a difference.

The organisation that brought on the referendum was called the Federal Council for the Advancement of Aborigines and Torres Strait Islanders (FCATSI). In 1970 Aboriginal people left the organisation and set up their own to continue the struggles ahead e.g. land rights.

By the 1820s, a few people in the colony were protesting, writing letters to newspapers, to missionary organisations in England. They lost friends and were made very unpopular.

According to Henry Reynolds it is a mythology that convicts escaped and fought, leading Aboriginal resistance. One such person was William Buckley (1780 – 30 January 1856). Buckley was an English convict who was transported to Australia, escaped, was given up for dead and lived in an Aboriginal community for many years. Another was Sean McDonaugh  who is the subject of the song by Paddy McHugh (see below).  Reynolds questions how effective convicts would’ve been as leaders, given the fact that they lacked the language and knowledge to lead aboriginal people. Aboriginal groups would not accept leadership from white people.

Reynolds gave the example of Richard Wendemeyer who came from a family dynasty in New South Wales and had been granted land up on the Hunter river. Wendemeyer felt justified in taking the land and explained his reasons but he then questions: ‘why aren’t we satisfied, what means this whispering in the bottom of our hearts’.

There was the other example of George Augustus Robinson in Tasmania who was deeply concerned when squatters were coming in and taking over large areas of land and that there was no place for aborigines. It was George Robinson who reported to local magistrate Edward Curr that there had been a massacre in his district in 1829. Curr had assisted in covering-up the massacre. Robinson could see that there was no transfer of land back to aboriginal people and impossible for them to survive. He reported to London that there was legally ‘no place for their feet’.

Officials in Sydney read his comments but put them aside, however in London and they went up the chain and it brought into being a concept of the pastoral lease which means land  could not be taken away from aboriginal use in customary life. This was ignored up until the Wik People vs Queenland case in 1996. In other words, Robinson’s complaint had no real effect until recently and formed the basis for indigenous land use agreements ILUAs in Native Title legislation.

Reynolds was in the thick of the history wars. It is important to remember that there will always people who complained about settlement on Aboriginal land.